Probably one of the coolest things about “growing up” is seeing what your friends—who you’ve know since say, third grade—wind up doing with their lives. Maggie has always been an athletic, kindhearted person with a go-getter personality and killer leadership skills, so it didn’t come as much surprise to me when she pursued, and successfully received, her yoga teacher certification.

I have always dismissed yoga as something I hate and am terrible at, but when Maggie was pursuing her certification, I excitedly agreed to attend a few of her practice sessions (with only a slight amount of dread in the back of my mind). Now, Hope and I have both taken Maggie’s class, and both agree that maybe we don’t hate yoga so much. Maybe it’s because we know her, but Maggie made us feel super comfortable doing something we don’t feel super comfortable doing. We left her class feeling rejuvenated and excited for the week ahead (sometimes a difficult feat for a Monday night).

Even though I know Maggie well, we were so excited for the opportunity to interview her for our blog and hear all about her journey to becoming a yoga instructor. Whether you’re a full-blown yogi or a skeptic like Hope and I were, we highly recommend checking out Maggie’s class!

Philly Fit Foodies: How did you get into yoga?

Maggie Greene: In college, I was forced to do yoga as part of being on the Villanova cheerleading team. I didn’t really like it at the time. It was in a gym on campus that was really cold, after a long day of classes and labs, and I was just not into it. But, being a cheerleader my whole life, it was relatively natural for me to be able to do those things with my body because of the body awareness I have from always cheering. Whereas most people are always like, “What do you want me to do?!”

After college, I moved to Atlanta and started doing yoga a little bit more. I went to some studios that were a little bit more welcoming of a space, with heat or at least some warmth, and really professional, good teachers, and I started to like it a bit more. My boyfriend, Rich, sort of pushed me a little bit more into it—he is kind of a hippie and thought it would be good for me on the emotional side of things—so it was definitely a gradual process.

Then, in 2016, I had a couple of serious injuries. I used to run a lot, but I couldn’t run anymore, so I was like, Well, I’m going to need something to replace that, and that was when I got super into yoga. I started doing it more for the emotional benefits, but then I realized it could actually be a really good workout, and now it’s so much of both. I feel like I’m in finally decent physical shape again. I’ll jog a little bit and still experience pain, so yoga is the only thing I can really do. I could probably do other things, but yoga is something I know I like and won’t leave me hurting,

PFF: What inspired you to get your yoga teacher certification?

MG: Ever since my injuries, I started to do yoga more seriously. I kind of knew in the back of my head that I’d get my teacher certification eventually, but it never felt like the right time. It’s a pretty big financial investment, along with a big time commitment.

Then, there were a few things that kind of fell into place. I found a studio in Bala Cnywyd that I really liked. The teacher was so cool and I just really liked her, and she does a training. Rich was going away for work training in a few months, so I realized I’d have a little bit more free time to do something for myself.

Yoga training is so much about the physical aspect, but there’s also so much writing, reading, self-reflection—stuff that I tend to shy away from. But I thought it would be really good for me. I had some family tragedy last year, so I thought yoga training was something I could give to myself. It ended up being all of that.

PFF: What was the certification process like? What did you learn?

PFF: How often do you practice yoga? What other forms of exercise do you enjoy?

MG: As far as other forms of exercise, I should probably find a cardio outlet that I enjoy and can do. Swimming would be a great option, but I really have no interest. I sometimes do the elliptical—once per week or once every couple weeks—just to make sure I’m getting my heart rate up. But other than that, it’s almost strictly yoga at this point.

I try to practice yoga about five days per week. It’s not always feasible with traveling for work. But a great thing about being an instructor—and part of my motivation to become one—is that you can practice at the studios where you teach for free. Working out can be really expensive, so even though you don’t make a ton of money teaching, it’s a little extra cash, plus being able to practice. I’ll bop around—I’ll go here (The Rabbit Hole), go to the studio where I trained, find a class on Classpass, or buy a Groupon. Some days, I’m like, Where am I gonna go today?!  But, I just figure it out.

PFF: How do you keep learning and improving your classes?

MG: I finished training about two months ago and I’ve started to ask myself, How do I improve and switch things up? A big part of it is going to classes, but there are a few amazing teachers that I really follow. One of the teachers I follow is a woman I trained with, named Lisa. Another teacher I follow, also named Lisa, teaches at another studio. They are some of my biggest inspiration and are both amazingly talented. They both teach full time—it’s their profession. I go to a lot of their classes, and then I’ll go home and jot stuff down.

Another thing that a lot of teachers will do is go to workshops, where you continue to learn and focus on certain skills or styles, learning and expanding your knowledge.

Then, there’s definitely a requirement to do some independent learning, like extra reading. I have textbooks from my yoga training, which I definitely go back and reference, especially when it comes to the Sanskrit. I had to pass an exam at the end of training, but it’s good to go back and refresh for what doesn’t stick.

PFF: You’ve been a vegetarian for about 4 years. Can you tell us about your decision to go veg and what your diet looks like now?

MG: I honestly didn’t know I would never eat meat again. I just felt like I needed a break. Then, three months passed, and six months passed, and it got easier and easier. So, all of a sudden, I was like, I don’t know when I stopped eating meat.

It was a weird decision because it happened over time. I became more and more weirded out by meat. It really started in college, because it wasn’t my parents handing meat to me anymore, it was a dining hall or a restaurant, which was kind of sketchy. I just started to be like, Yeah, I don’t think I’m gonna eat that. I could never cook it for myself—raw meat is the grossest thing to me—so I was like, Where am I supposed to get it? Then, the less I had it, the less I craved it. I used to love bacon, and now the smell of it grosses me out. The last thing I ate was a big cheeseburger at a summer BBQ. I took a bite and was like, Nope, I need a break. So, it kind of happened gradually, and it definitely got a lot easier over time.

I used to have a lot of stomach issues and being vegetarian has really helped a lot. I don’t know if that’s just me, or more of a general thing. I’m not vegan, so I still eat dairy. I eat a lot of eggs. I don’t think I have issues getting protein—I have muscles and I feel okay (**giggles**).  I don’t eat fish. All of it has just started to gross me out so much.

There was never a moral reason behind being a vegetarian for me, but now that it’s been so long, I start to think about it more. I work in the environmental field, and I think about how much corn we produce to feed the animals, which also uses up so much land and water—I just think, Is this necessary?  It all kind of builds on itself. I’m in no way offended when people eat meat around me, I just don’t want to do it.

We’ve been doing Blue Apron and I’m obsessed with it. Each time, it’s something new and always vegetarian, and it never gets boring. When I look at the nutrition facts, it’s always way more protein than I need.

PFF: What are your favorite places in Philly for veg-friendly options?

MG: I should know better, but I don’t eat out too much. I love Hip City Veg. That place rocks. I love really good Indian food—there are always great vegetarian options. I always order from Indian Cuisine. If you drive by, you wouldn’t think it’s anything special, but it’s really good! Vedge is also amazing. It’s awesome because people who aren’t vegetarian would really enjoy it there. Bar Bombón is great, too. I’m still kind of exploring and open to suggestions! I’ve been told I need to check out Memphis Taproom in Fishtown for their vegetarian options, so that’s on my list.

PFF: What yoga pose are you perfecting right now?

MG: I’ve been working on handstands for a long time. I’d say handstands are kind of the pinnacle of the physical postures. I can do a handstand 8 times out of 10, but I would never do it in the middle of a class in case I fall on anyone. I feel more comfortable up front and close to a wall. I normally kick one foot up at a time, but I recently discovered that, from downward dog, I can kind of float up into a handstand with straight legs. The first time I did it, I was like, Wait, wow, I had no idea I could do this!

This post is part of our instructor interview series—where we’ll shine a spotlight on some of our favorite instructors in Philly. Want to be featured or recommend an instructor for us to interview? Contact us to get started. 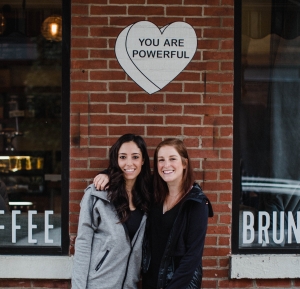